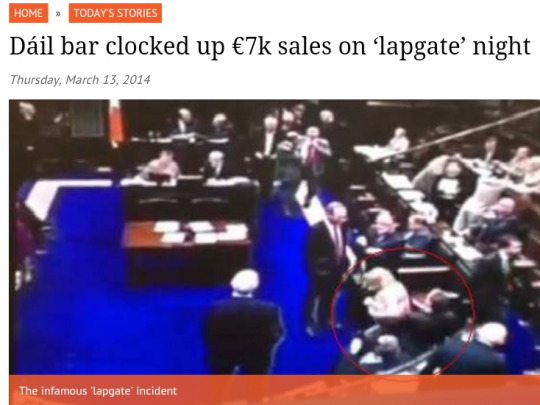 “Students queuing for a pub?! The youth of today are losing the run of themselves, Joe!”

OK, I wanted to write something on Donegal Tuesday and Galway Rag Week, or more to the point, the coverage in the media. I’ve seen Galway Rag Weeks, Arthur’s Days, post-ball parties, exam parties, you name it, in the flesh- I’ve done my time, paid with the hangovers. It gets messy, yes. Some assholes take it too far and make a nuisance of themselves, yes. I’ve also seen Galway Race Week in the flesh. There’s nothing you can say about it that you couldn’t say about RAG week, except that it’s folks of all ages, not just students. Some of them happen to be city councillors. Even TDs. All-day boozing, pissing in the streets- race week is Donegal Tuesday week dialled up to 11, except in fancier clothes, and the media will run puff pieces about hats and the great boost it will give the local economy.

On Tuesday, Liveline devoted an hour to people reacting to students queuing for a pub. The arguments were predictable, with added insinuations about the employment status of the young people there and the usual crap along the lines of the “they all have flatscreen TVs, Joe!” frenzy. Last RAG week one of the city clubs closed due to overcrowding and RTE news dispatched someone to report from Galway as if it was a war zone. Race week gets plenty of coverage too, of course, but mostly about what a great cornerstone of Irish culture it is.

The student on who spoke on Liveline claimed that February was “designated drinking month” for Irish students, as it comes at a relative lull in the college year, with Christmas exams being over and the finals still months away. Donegal Tuesday, he argued, was merely another one in a long line of Irish traditions revolving around drink. Joe nearly had kittens. The student might have been blunt, but there was an undeniable ring of truth there. Births, deaths and marriages are marked with drink. When Barack Obama visited Ireland, the image beamed around the world was the president with a pint in his hand. A former Taoiseach’s drunken interview made it onto Jay Leno. I won’t even get into the Dáil bar and the night of lapgate. Just last week the government abandoned plans to introduce stricter rules around sponsorship and sports events. The Irish establishment and booze goes together like, well, vodka and coke.

Donegal Tuesday should not be above critique, but it is a symptom of a wider malaise, and one that didn’t start in the last 5 or 10 years. Demonizing students for the problems of an entire culture is Irish hypocrisy at its finest.

Error: Twitter did not respond. Please wait a few minutes and refresh this page.